What caused the world’s largest die-off of mangroves? A wobble in the moon’s orbit is partly to blame 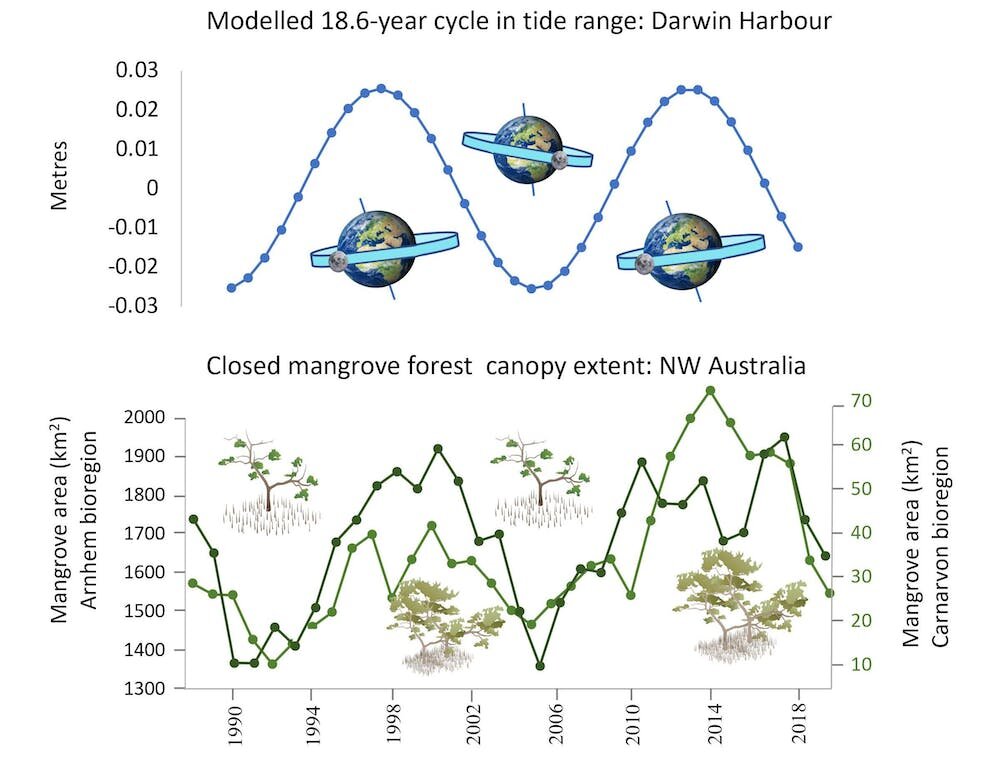 Over the summer of 2015, 40 million mangroves died of thirst. This vast die-off — the world’s largest ever recorded — killed off rich mangrove forests along fully 1,000 kilometers of coastline on Australia’s Gulf of Carpentaria.

The question is, why? Last month, scientists found a culprit: a strong El Niño event, which led to a temporary fall in sea level. That left mangroves, which rely on tides covering their roots, high and dry during an unusually dry early monsoon season.

Case closed. Or is it? While evidence clearly implicates El Niño, we found this climate cycle had a very large accomplice: the moon.

In our study, published in Science Advances Today, we mapped the expansion and contraction of mangrove forest cover over the past 40 years, and found clear evidence that the moon’s orbital wobble had an effect.

Our mapping also shows mangroves are expanding and their canopy thickening across the entire continent, which is most likely due to higher carbon dioxide levels. Spectacular though it was, the Gulf of Carpentaria mangrove dieback event was entirely natural.

What clues gave away the moon’s role?

During El Niño cycles like the one in 2015, sea levels fall around Australia and other countries in the western Pacific.

But these climate cycles affect the whole Indo-Australian region. If El Niño was the main cause, mangroves elsewhere should have been hit too. But the deaths of these tidal-flat dwelling shrubs and trees were largely localized to the Gulf of Carpentaria. Death rates were highest along shorelines that experience the full range of the tide. By contrast, mangroves continued to thrive at the tidal limits of the estuaries, far into the floodplains where climatic effects ought to be most strongly felt.

That’s where the moon comes in — and particularly the “lunar wobble.” Back in 1728, astronomers noticed the plane in which the moon orbits Earth is not fixed. Instead, it wobbles up and down, a bit like a spinning coin as it begins to slow.

When we mapped the extent and distribution of Australian mangrove forests over the past 40 years, we found clear signs of the moon’s wobble at work. This 18.6-year orbital cycle turns out to be the main reason why mangrove canopy expands and contracts around most of Australia’s coastlines — and explains the patterns of mangrove mortality in the Gulf of Carpentaria.

You might be wondering why the wobble has such influence over whether mangroves live or die. It’s the tides. The wobble changes how the moon’s gravity pulls on the world’s oceans, so periods of exceptionally high tides are followed by exceptionally low tides 9.3 years later.

The lunar-mangrove cycle is clearly visible from above. When we mapped changes to dense mangrove forest in Northwest and Western Australia, we saw clear peaks in closed canopy — where mangrove leaves and branches thicken to cover more than 80% of the ground — coinciding with the highest tidal phase of the lunar cycle.

When the tides are at their highest, water inundates mangroves and brings nutrients, which accelerate growth. These periods potentially influence how much blue carbon is stored by mangroves over thousands of square kilometers.

But when the tides are at their lowest, mangroves can’t get the water they need. Over 2015–2016, the lunar wobble reduced tide range in the Gulf of Carpentaria — enough to slash tides by an estimated 40cm. Earlier mangrove dieback events in 1998 and 1982 also coincided with these troughs.

In 2015, tides along Australia’s northern coastline fell further still under the influence of El Niño, which moves seawater to the eastern Pacific. The result of the overlapping lunar and climate cycle in the Gulf of Carpentaria was the mass death of mangroves.

One challenge we had was to distinguish between the effects of El Niño and the lunar wobble, given they tend to occur in the same time period in the western Pacific. Some scientists have even suggested the lunar wobble may contribute to intense El Niño events.

The lunar wobble’s timing of the high and low tide range periods is reversed between coastlines with two high tides each day (semi-diurnal tides) and those receiving one high tide each day (diurnal tides).

This explains why mangroves in the semi-diurnal coastlines directly next to the Gulf of Carpentaria were spared over the 2015–16 summer.

The northern coastlines next to the gulf were in the big-tide, high-productivity phase of the 18.6-year cycle and so were protected from El Niño. In the diurnal Gulf of Carpentaria, the small tide phase of the lunar wobble cycle combined with El Niño. Lower sea levels and lower tidal range pushed mangroves over the edge.

Interestingly, mangroves kept growing near the tidal head of rivers in the gulf despite the El Niño, because the effect of the lunar wobble was less pronounced upriver.

This is good news for mangroves. We now know short-term natural climate cycles like El Niño likely cannot cause widespread mangrove deaths by themselves. And we can anticipate the danger times when it coincides with the low tides brought by the lunar wobble.

While mangroves still face an uncertain future adapting to a world of higher seas, we can chalk the 2015 mass death up to “natural causes.”

Provided by The Conversation

This article is republished from The Conversation under a Creative Commons license. Read the original article.

Citation: What caused the world’s largest die-off of mangroves? A wobble in the moon’s orbit is partly to blame (2022, September 15) retrieved 15 September 2022 from https://phys.org/news/2022-09-world-largest-die-off-mangroves-moon.html

This document is subject to copyright. Apart from any fair dealing for the purpose of private study or research, no part may be reproduced without the written permission. The content is provided for information purposes only.