Strange Magic: The Many Cinematic Universes Of DOCTOR STRANGE 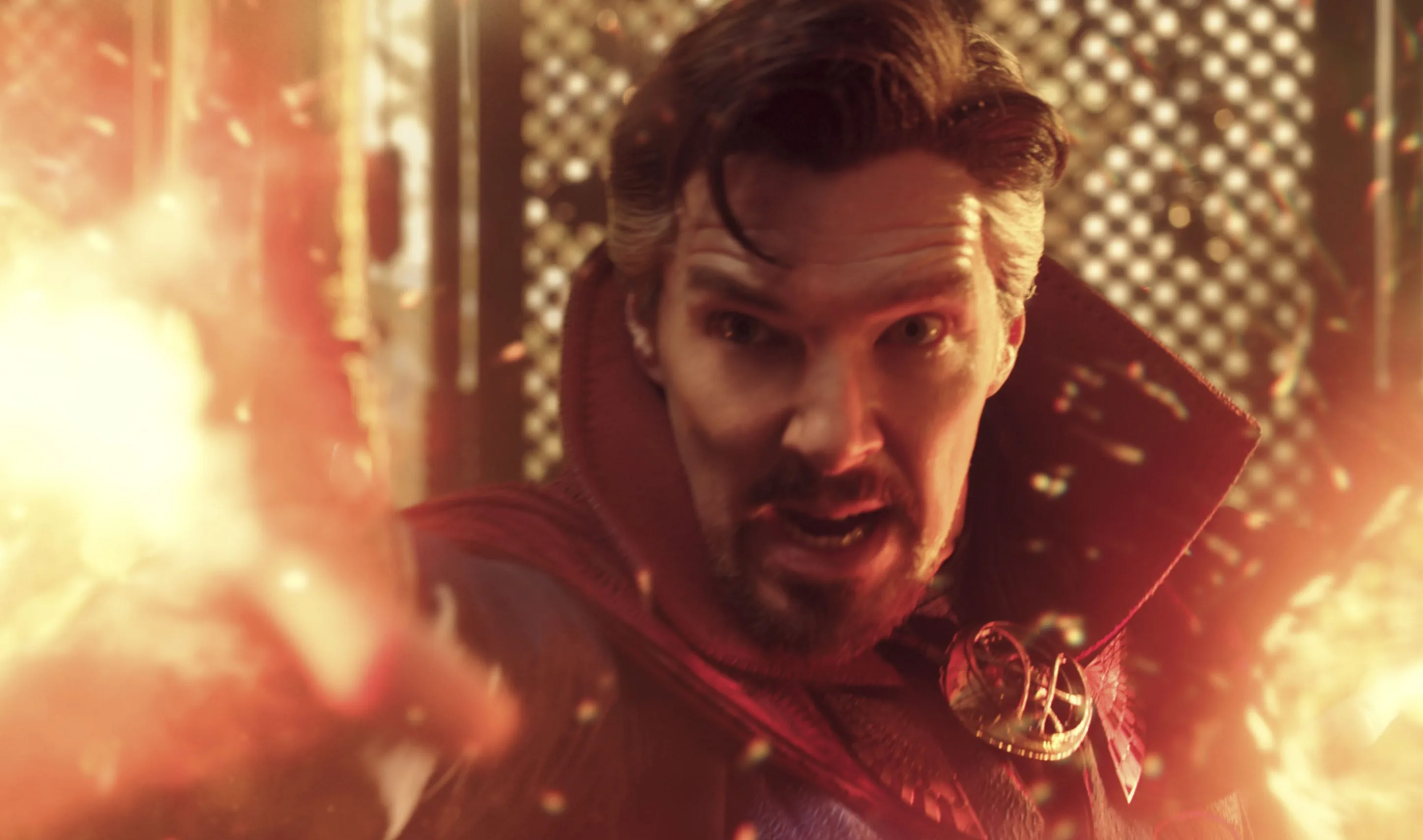 By the Ruby Rings of Raggadorr! Doctor Strange has returned to our universe … and beyond! The Master of the Mystic Arts is no stranger to the macabre, but Sam Raimi’s Doctor Strange in the Multiverse of Madness promises to be the Marvel Cinematic Universe’s first horror movie. With that film on its way to our humble reality, exploring the Doctor Stranges of cinema’s multiverse felt appropriate. From the spellcasters who inspired the Sorcerer Supreme to Stephen’s early forays into film, we shall gaze into the Eye of Agamotto and reveal the many forms of the man they call Strange. On our journey into mysticism, we shall encounter magic, menace, and monsters far too weird for just one dimension. Unlike the average superhero, Doctor Strange has always been close to the horror genre, so expect to see many familiar fiends here. And with the protection of the Sorcerer Supreme, we now venture into the unknown! 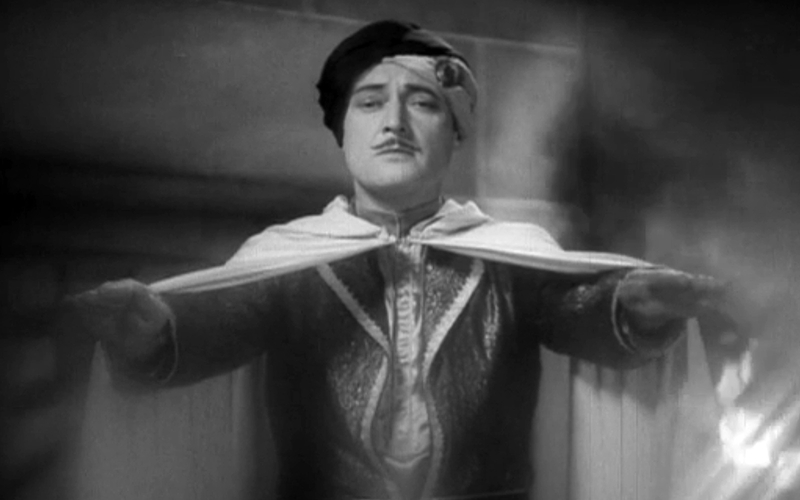 Long before Doctor Strange uttered his first dramatic incantation, there was another man of magic: Chandu the Magician. Created by Harry A. Earnshaw and Raymond R. Morgan, Chandu was the eponymous star of a popular radio show that was broadcast from 1931 to 1936. Marvel legend Stan Lee often cited Chandu as the key inspiration for Strange, and the similarities are easy to spot. Like the Marvel-ous mage, Frank Chandler AKA Chandu was an American who learned supernatural skills from Asia. (Chandu trained in India. According to Strange Tales # 115, so did Strange. However, Marvel eventually changed it to “Kamar-Taj,” a fictional community located in the Himalayas.) The two wizards share several abilities, most notably the power of astral projection. Their chief antagonists are sinister barons who also dabble in the dark arts. Edmund Lowe, the first actor to play the hypnotic hero on film, certainly looked a lot like Stephen Strange with his Clark Gable mustache. 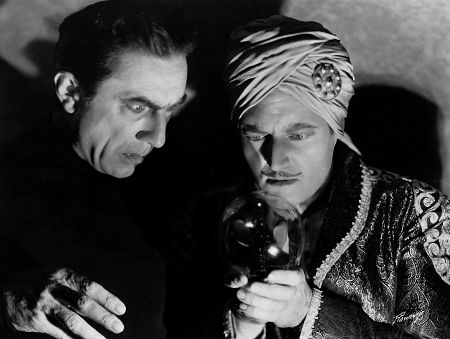 Speaking of Lowe, the ancestor to all Strange-adjacent magic movies is 1932’s Chandu the Magician. You do not hear people talk about it often, but the film is possibly cinema’s first superhero spectacle. With clever optical effects and miniatures, the film casts its spell. Watching Chandu the Magician is like watching a classical stage magician: the tricks pulled are old-fashioned, but they still have the power to astound. Spirits leave the body, tiny doppelgangers appear out of nowhere, coins transform into bugs, guns into snakes, and more fantastic feats defy our notion of reality. It is not sophisticated entertainment; it’s just great entertainment! To menace our mystic guardian, we have the vamping Bela Lugosi as the diabolical Roxor, the Baron Mordo to Chandu’s Doctor Strange. Lugosi hams it up perfectly here and delivers what may just be my favorite supervillain monologue. Pulp adventure does not get much better than this, folks. 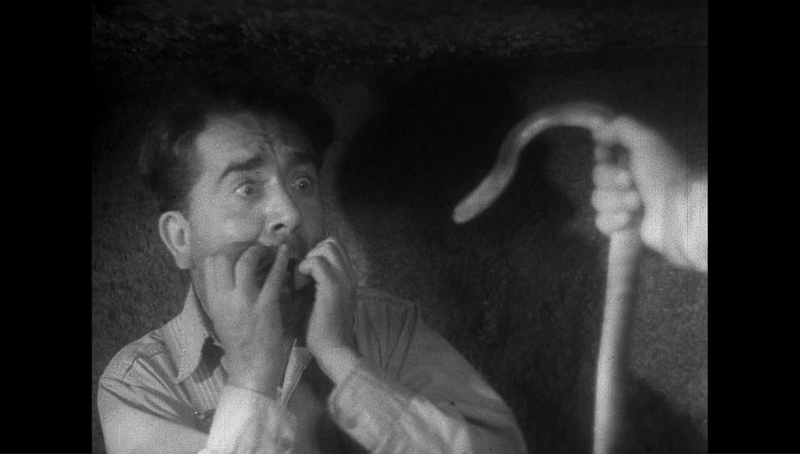 Lugosi got promoted from villain to hero in The Return of Chandu, a twelve-episode film serial in which Lugosi portrayed Chandu. Predicting Super Mario as well as Doctor Strange, Chandu is on a mission to rescue a kidnapped princess. In most of Lugosi’s pictures, he was the one doing the kidnapping, so it is refreshing to see Dracula himself on the side of the angels. Return… isn’t as great as the first Chandu outing, but it’s a fun little serial that supplies traditional thrills. It’s worth watching just to see Lugosi as a proto-Strange. (Has any other actor played both a superhero and his archenemy?) 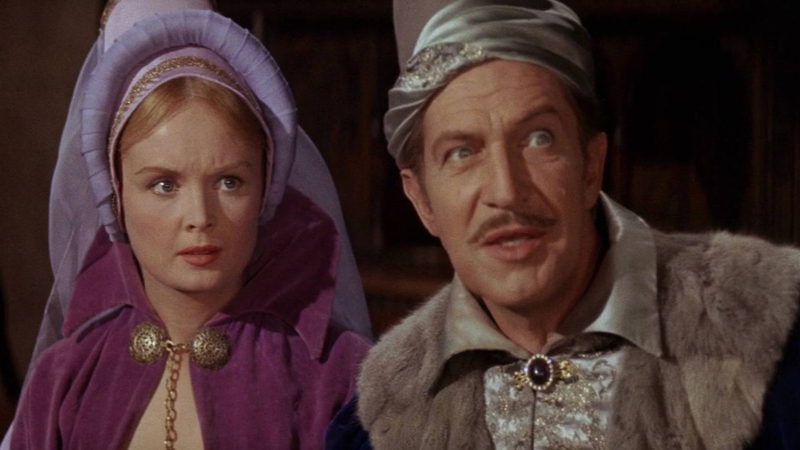 In 1963 (the same year our good doctor made his debut), Roger Corman conjured up some conjurers in The Raven. Ostensibly based on the Edgar Allan Poe poem, the film is actually a weirdly wacky horror-comedy about the power struggle between sorcerers played by Vincent Price, Peter Lorre, and Boris Karloff. (Man, what a trio!) Price is the strange Dr. Erasmus Craven, a benevolent practitioner of sorcery who must outmaneuver Boris Karloff’s evil Dr. Scarabus in a duel of the magicians. The final battle of Craven against Scarabus is an ingenious series of special effects gags that demonstrate how imagination can triumph over a low budget. (My favorite bit is when gargoyles transform into puppies through dramatic lighting and sound effects.) It also anticipates Doctor Strange’s own brand of magic with its extensive use of dramatic hand gestures. 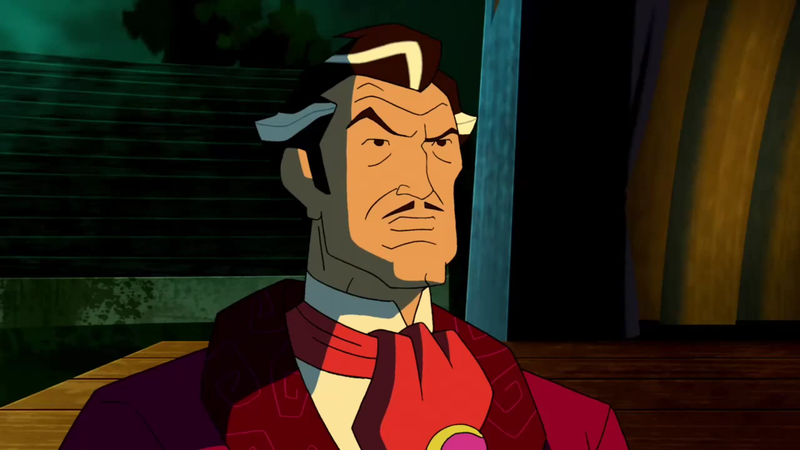 Strange co-creator Steve Ditko modeled the doctor after Vincent Price, presumably because of his turn as Erasmus Craven. As an additional tribute to the Merchant of Menace, Stephen Strange’s official middle name is Vincent. While I was not able to find Vincent directly acknowledging the influence he had on Strange, the great horror king did return the favor on The 13 Ghosts of Scooby-Doo. Price voiced Vincent Van Ghoul, a sorcerer who learned his craft in the Himalayas. There were several references to Strange’s lore on Scooby-Doo, including an homage to the Vapors of Valtorr spell (“Vapors of Vahishnu”). Because of these connections, I always read Strange’s voice as Price’s in my head. 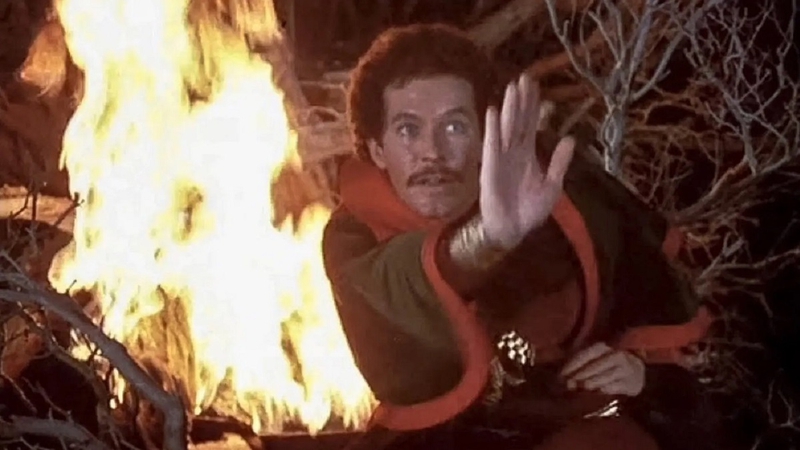 Doctor Strange made his official film debut in the aptly-named TV movie, Dr. Strange. Aired in 1978 as a pilot for a proposed television series, Dr. Strange was meant to capitalize on the popularity of The Incredible Hulk show. Though it was not a success, Stan Lee felt a certain fondness for it.

In 1985, Lee said the following in Comics Feature Magazine in regard to the film: “I probably had the most input into that one. I’ve become good friends with the writer / producer Phil DeGuere. I was pleased with Dr. Strange and The Incredible Hulk. I think that Dr. Strange would have done much better than it did in the ratings, except that it aired opposite Roots. Those are the only experiences I’ve had with live-action television. Dr. Strange and The Incredible Hulk were fine. Captain America was a bit [of a] disappointment, and Spider-Man was a total nightmare. “In my opinion, the first half of the movie is a little slow, but the psychedelic finale is pretty groovy. Peter Hooten is no Vincent Price, though he did a fine job as the Master of the Mystic Arts. 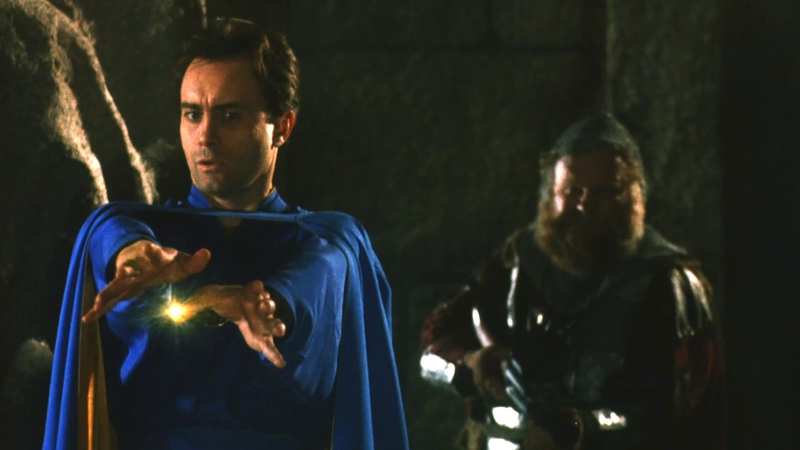 Chandu inspired the creation of Doctor Strange, and Doctor Strange inspired Doctor Mordrid. Charles Band of Full Moon Features had an option to adapt Doctor Strange, but the option expired before production began. Instead of scrapping the project altogether, the pragmatic Band simply changed the character names and gave us Doctor Mordrid. While Strange was simply a normal man who sought to heal himself after a car accident, Doctor Mordrid was an interdimensional wizard sent to our realm by an alien called The Monitor. Here in our reality, he protects us from eldritch threats as the Master of the … Unknown. Jeffery Combs is Doctor Mordrid, making him the third horror icon to play a Strange-like magician. Comb’s unique charisma made him a perfect choice for a Strange-esque superhero. Combs are the main attraction, but the stop-motion fight between two prehistoric skeletons makes this one all the better. 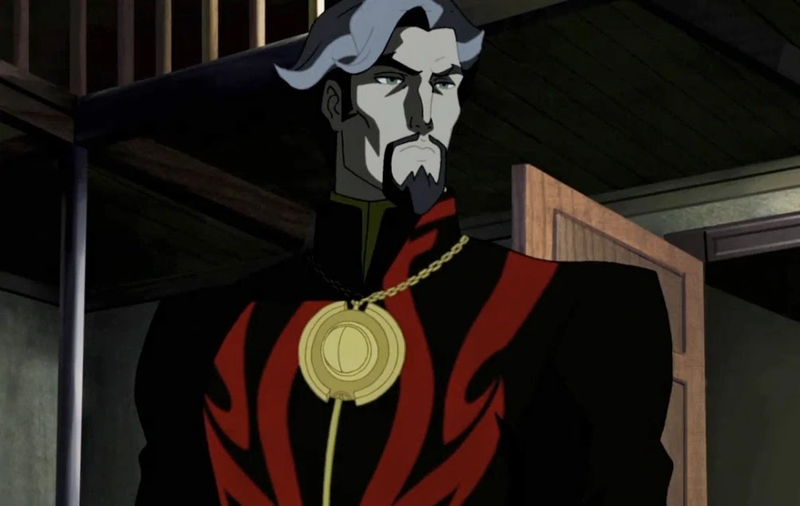 From Re-Animator to animation, we now have Doctor Strange: The Sorcerer Supreme. Released to video in 2007, this animated feature deals with the origin of the mystic doctor. If you’re familiar with Doctor Strange, it’s a fairly straightforward telling of his backstory. There are monsters, demons, and other such things that are likely to delight the creepy little kid inside us all. As far as direct-to-DVD features go, this one is pretty good. 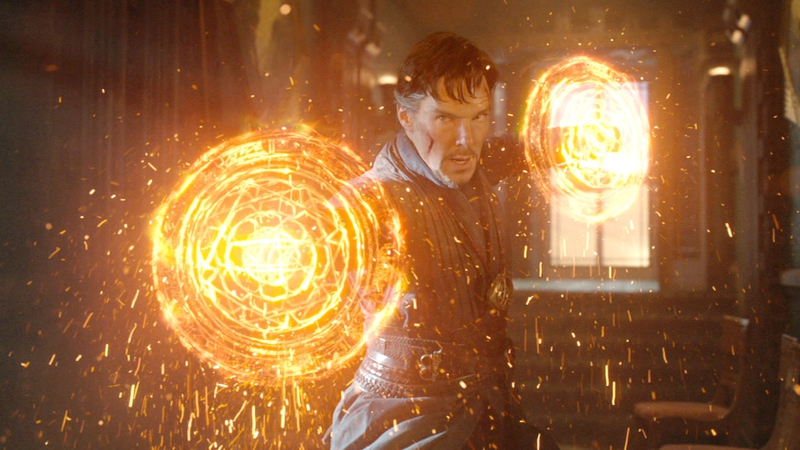 And now we enter the Marvel Cinematic Universe. 2016’s Doctor Strange is the movie that made a cult superhero a household name. Since Strange can never be too far removed from horror, the film was directed by Scott Derrickson of Sinister fame. While the movie never goes quite as weird as I’d want it to, it was nevertheless a perfect MCU blockbuster. Even as someone who tends to prefer foam rubber effects, I have to admit that the CGI here is truly magical. The climax in which Doctor Strange outsmarts the Dread Dormammu (his great enemy from the comics) instead of fighting him encapsulates everything that makes Strange stand out in a crowd of capes and spandex.

After his MCU debut, Strange became a regular in the most successful film franchise in modern cinema. I certainly hope the folks at Disney never forget Strange’s horror / pulp roots. If Doctor Strange in the Multiverse of Madness is a monstrous smash hit, perhaps we’ll see more of Strange’s spooky side. After all, a character who has ties to Bela Lugosi, Vincent Price, and Jeffrey Combs can not stay away from the graveyard for too long.

Doctor Strange in the Multiverse of Madness casts its spell in theaters May 6th.