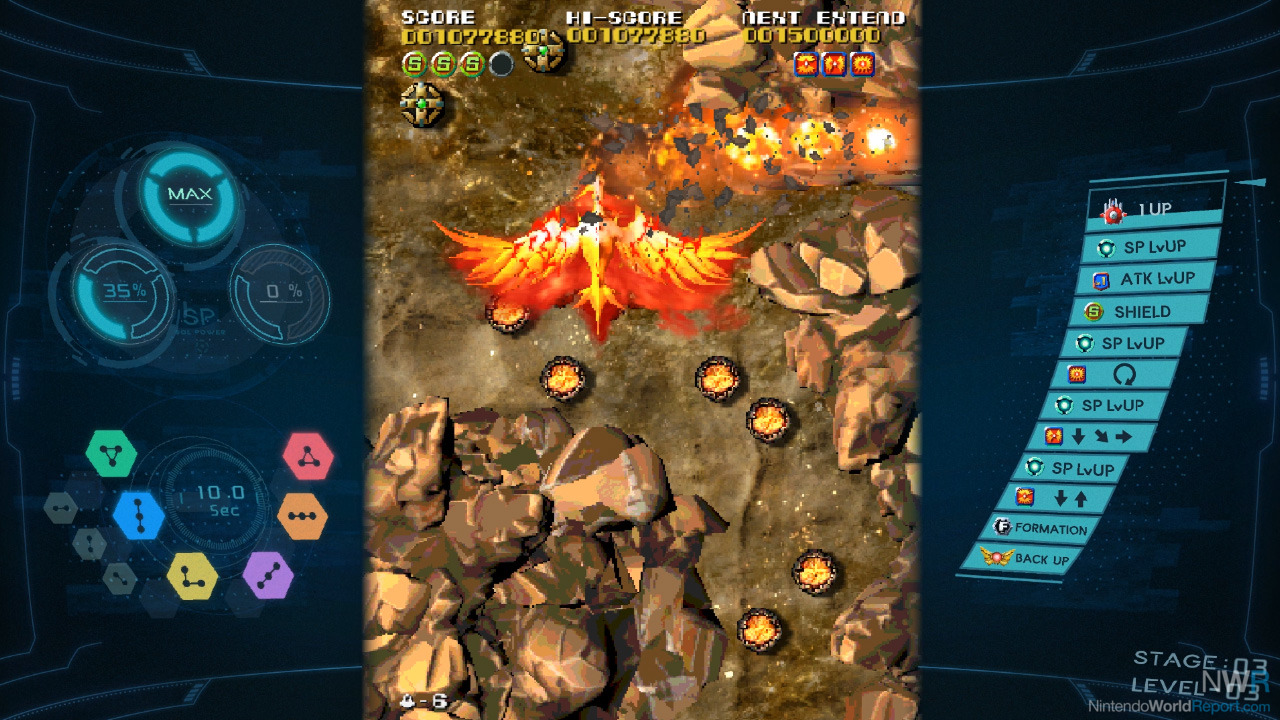 PlatinumGames try their hand at a vertical shooter and the result is a near bullseye.

A spiritual successor to classic arcade games Moon Cresta and Terra Cresta, SOL CRESTA is a fun, well-designed vertical shooter. While certainly a departure from the action titles PlatinumGames is known for, this space-themed shooter takes you through the planets of our solar system, but where it excels is in the minute-to-minute adjustments you need to make to power up your ship. and score as many points as possible. What SOL CRESTA borrows from the aforementioned games and then builds on is the ability to dock three fighters together into a single ship but also to spread them out into different formations that activate unique attacks. The result is an experience that feels as fresh as it does familiar, and is ultimately pretty damn hard to put down.

Starting from Neptune, you journey across seven total stages as you blast your way through all sorts of enemy fighters, asteroids, barriers, and mechs. While some of the bosses end up showing up multiple times, often with a new wrinkle added to the encounter, the stages themselves can be just as, if not more, deadly. Blockades, retractable doors, and immovable walls crop up in between waves of enemies, forcing you to stay on your toes to avoid taking damage. Spikes can even shoot out from the background, giving the stages a nice feeling of depth. Color-coded rings can be flown through and will net extra points if you have the right fighter in front. 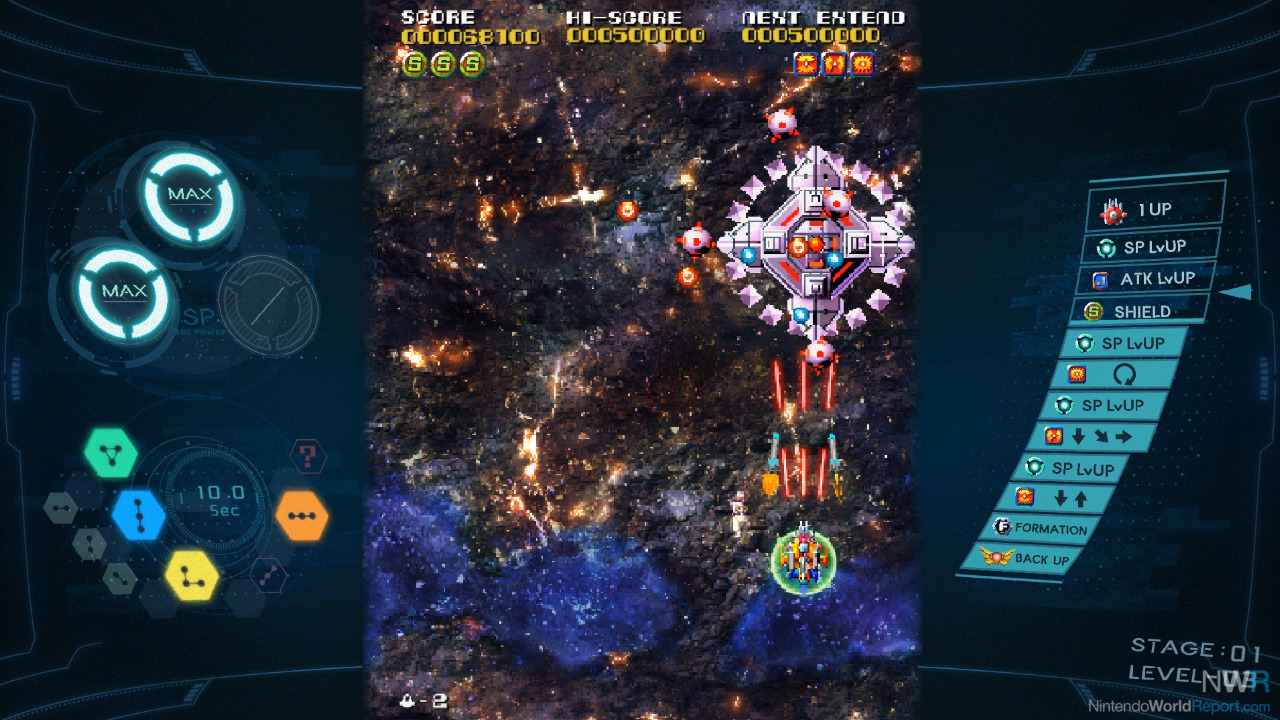 In addition to coins and extra shields, from starting out with a single fighter (red, blue, or yellow), your first power-ups will always be the other two ships until you have the full trio. At any time, you can break your standard formation of the three ships stacked together to rearrange their order, which determines your primary fire. Red shoots lasers that are good at taking down larger waves of weaker enemies; blue shoots missiles that home in on their targets; yellow fires a drill-like projectile in a straight line that does more damage. Each ship also has its own charged shot that builds up as you take down enemies.

As your score builds up, you’ll fill up not only your special weapon meter but a ladder that awards a different bonus at each step. These include more special weapon gauges, stronger weapons, extra lives, and even combo attacks that are activated with joystick inputs not unlike a fighting game. Another power-up you’ll collect looks like an emblem with three dots on it; each one represents a different formation you can put your three ships in to activate a devastating ability, which can do massive damage to end-of-level bosses. On the easier difficulty settings, you’ll be impervious to damage when using these formation attacks, but otherwise you’ll need to be mindful of incoming projectiles as you work to dole out as much punishment as possible. 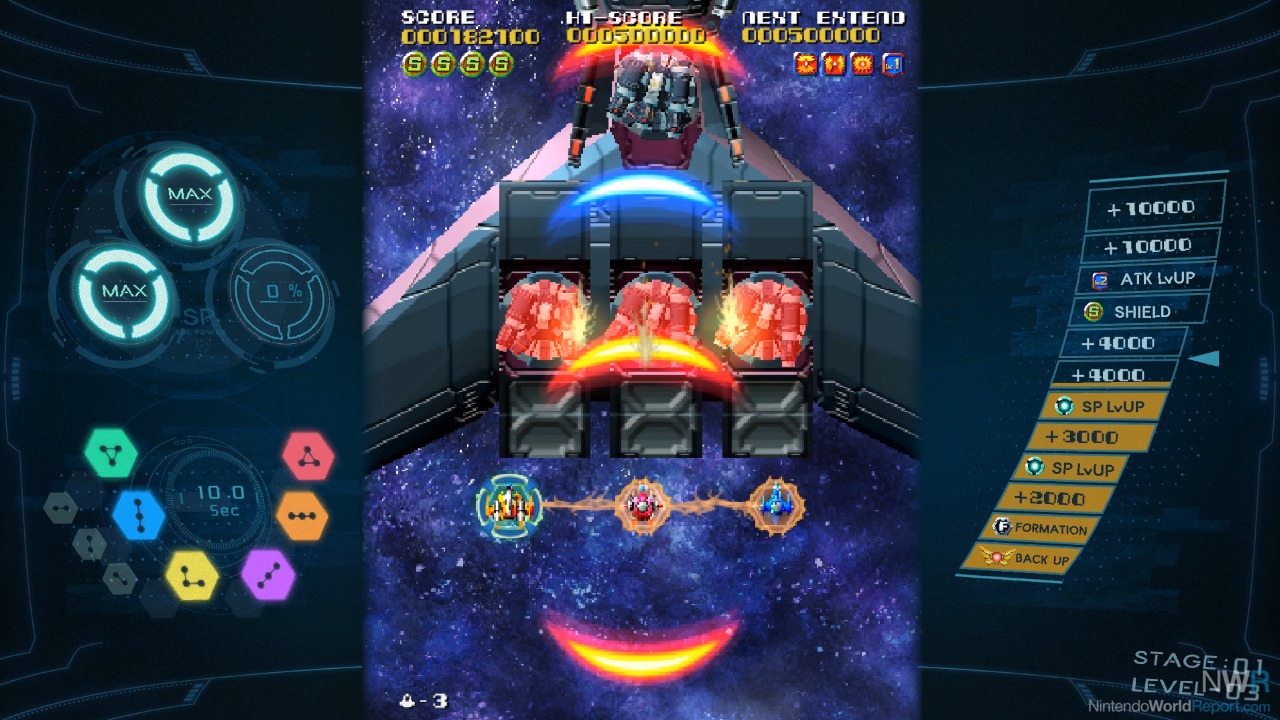 Another standout feature of SOL CRESTA is the Yuzo Koshiro-composed soundtrack. The classic arcade sounds of the 80s are given a modern twist, and the result is a game filled with songs you’ll want headphones for. Some of the later tracks in particular are absolute bangers, and I was very pleased to eventually unlock a Sound Test mode so that I could go back and listen without all of the background effects. The visuals aren’t quite as impressive given that they seem to be attempting more of a retro aesthetic, but the nostalgia-hungry will certainly get their fill.

SOL CRESTA is an intense and deep vertical shooter entry on Switch, and genre enthusiasts would be doing themselves a favor by adding it to their libraries. In-game achievements unlock new content, such as Caravan Mode, online leaderboards, and the aforementioned Sound Test. Even finishing the final stage on normal difficulty is a steep challenge that requires a fair measure of skill, particularly with swapping formations and the slowing of time that this ability grants. If this is the level of quality we can expect from future arcade-style shooters courtesy of PlatinumGames, I’ll be demanding as many as we can get, until Kamiya-san blocks me on Twitter.