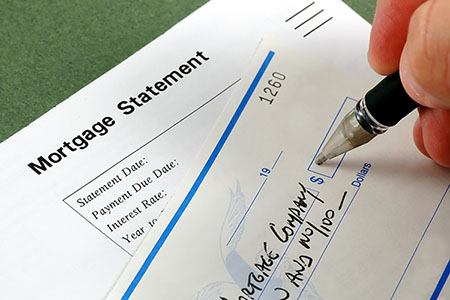 Rates will go up this year as the Fed fights inflation.

17-Feb-22 – As the mortgage rate roller coaster heads uphill, the record low home loan deals in the upper two-percent range – that kept the housing market pumping over the past two years – are a distant memory. 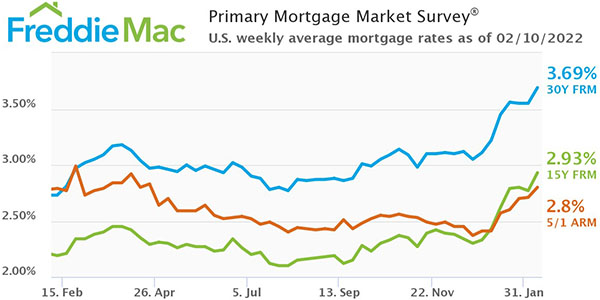 “The normalization of the economy continues as mortgage rates jumped to the highest level since the emergence of the pandemic,” noted. Sam Khater, Freddie Mac’s chief economist. “Rate increases are expected to continue due to a strong labor market and high inflation, which likely will have an adverse impact on home buyer demand.”

On February 11, the 10-year Treasury rate – the gauge economists use to forecast 30-year fixed mortgage interest charges – rose to 2.04 percent from 1.93 percent.

This means that benchmark four-percent-plus mortgage rates are on the near horizon.

The Freddie Mac survey is focused on conventional, conforming, fully amortizing home purchase loans for borrowers who place a 20 percent down payment and have excellent credit.

To rein in inflation, which ran at a 7.5 percent clip in 2021 – the highest level in four decades – the Federal Reserve Board said in mid-December it plans to shift from a relaxed monetary policy that has supported the economic rebound from the 2020 pandemic recession toward a tighter policy.

Earlier, the National Association of Home Builders forecast that the federal funds target rate will likely undergo three 25-basis-point interest hikes in 2022 and three more similar increases in 2023. However, some economists are now predicting a 50-basis-point Fed. rate hike in March.

An earlier forecast by the Mortgage Bankers Association projected 30-year fixed home loan rates rising to 4 percent by the end of 2022.

Now it looks as if the 4 percent level could be reached in March. If the Fed hikes its rates three more times in 2022, mortgage rates could easily rise to 4.5 percent or higher by the end of the year.

Thirty-year fixed mortgage interest rates ended 2020 at a rock-bottom 2.66 percent, the lowest level in the Freddie Mac survey history, which began in 1971. Home loan rates set new record lows for an amazing 16 times in 2020, and tens of thousands of homeowners refinanced.

However, Chicago-area borrowers who move quickly still have a chance to lock in the following bargain rates as of February 10, reports RateSeeker.

• Gateway Capital Mortgage in Chicago was quoting 3.4 percent on 30-year loans and 2.75 percent on 15-year mortgages with a 3 percent down payment and a $ 595 loan fee.

Archives of the now-defunct Federal Housing Finance Board show long-term mortgage rates in the 1960s were not much higher than during the Great Depression, when lenders were charging 5 percent on five-year balloon loans.

Mortgage tech is boldly going where no one has gone before. Since January 29, borrowers have been able to buy a parcel of land and pay for it with Bitcoin.

Terra Zero Technologies has issued a two-year, $ 45,000 land loan, one of the first mortgages in the metaversea network of virtual worlds where users can interact and borrow money.

The deed to the land is a “non-fungible token” (NFT). Until the loan is paid off, the lender escrows the Bitcoin. Developers, on the other hand, are given land rights, allowing them to build whatever they want on the parcel. If the borrower does not pay off the obligation, the lender keeps the Bitcoin.