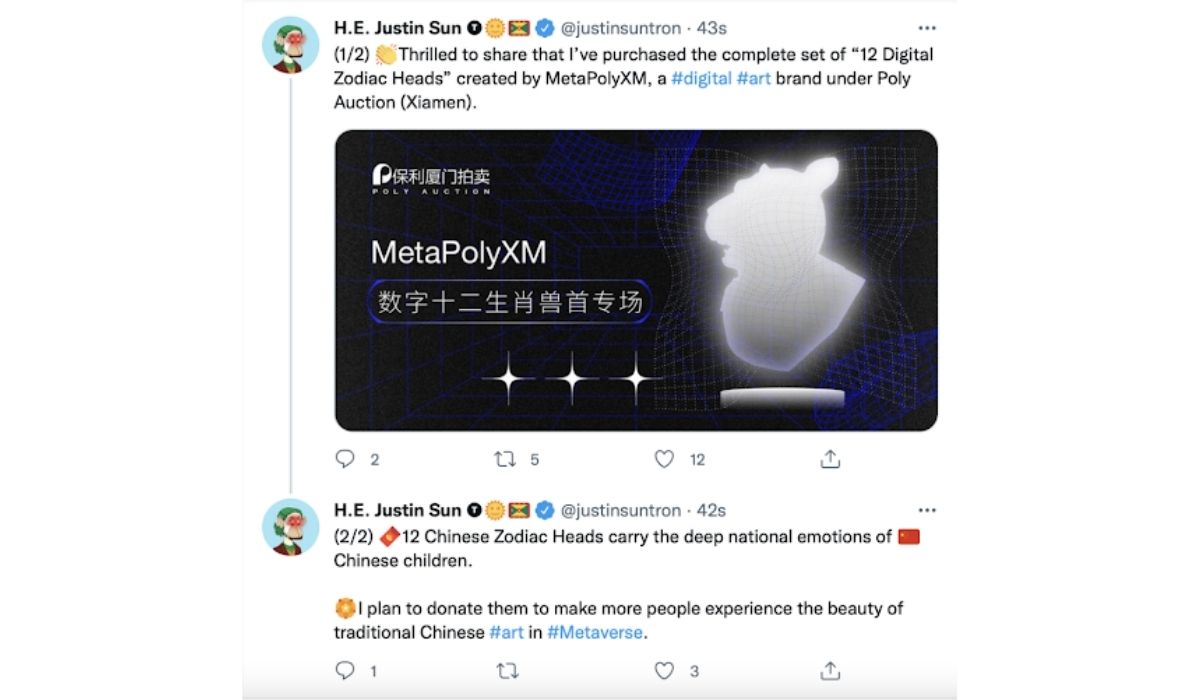 Being an avid fan of the fast-growing NFT industry whose artistic passion may have been intensified by the latest wave of the NFT craze, Justin Sun is already earning himself the title of the leading NFT Collector in the industry.

Justin Sun, a Y-generation crypto tycoon who keeps seeking to explore the potentials of the crypto space while venturing big into NFTs has recently unveiled that he has purchased the complete set of twelve Chinese Zodiac Heads, which was put on the Twelve Digital Zodiac Heads. Special Auction hosted by Metapoly XM, a brand under Poly Auction (Xiamen).

Justin Sun had acquired the unique collection at a hammer price of about, 9,832,500 (around 1,545,000 USD). This caught the attention of many and has boosted Sun’s recognition as a leading collector.

The purchase suggests that Sun does not forget his cultural identity as a genuine Chinese as the Chinese Zodiac Signs are regarded as the essence of traditional Chinese culture, representing the philosophy of Chinese astronomy, calendars, and legendary SAGAs. Every Chinese person is expected to understand and embrace the meanings and values ​​of zodiac signs.

Justin is apparently obsessed with the crypto industry as reports revealed that he had significantly ventured into several NFT collections in the previous times. Sun had confidently spent 500 thousand dollars to purchase an NFT rock last August. The virtual rock could neither be pet nor be taken home, although the price could be on a par with some of Picasso’s work.

That NFT rock apparently cannot satisfy Justin’s appetite as an art collector. For now, Sun owns Beeple’s “Ocean Front” NFT piece at the stunning price of $ 6 million and bought a Joker Tpunk NFT avatar for up to $ 10.5 million dollars. He has also purchased Andy Warhol and Picasso paintings in terms of the idea of ​​tokenizing the rare art pieces by NFT and donated them to the APENFT Foundation.

Furthermore, Justin Sun had also donated a number of well-known works, such as donating Le Nez and Femme nue couchée au collier (Marie-Thérèse) to APENFT Foundation, a virtual platform for the matchmaking trade-offs of NFT works amid the progression. of the METAVERSE era. Justin always wants to do something to support the development of digital art and the blockchain industry.