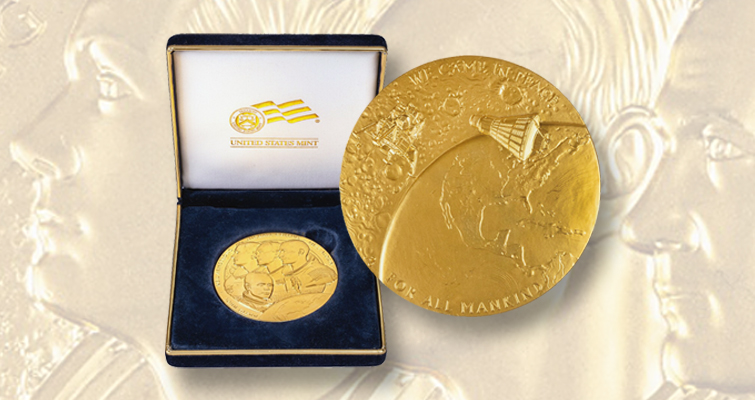 The lots were from the personal collection of Edwin E. “Buzz” Aldrin Jr., perhaps best-known for his role as Apollo 11 Lunar Module pilot. The gold medal was one of four minted, awarded to Aldrin along with his Apollo 11 crew of Neil Armstrong and Michael Collins, and Mercury astronaut John Glenn. Aldrin was the second person to walk on the moon, following Armstrong.

The gold medal was authorized by the New Frontier Congressional Gold Medal Act, which authorized a medal honoring the 40th anniversary of the first lunar landing by humans in 1969. The medals, the first congressional gold medals to be awarded NASA astronauts, were presented during a ceremony held in the Capitol Rotunda in Washington, DC, on Nov. 16, 2011. The medal is Congress’ “highest expression of national appreciation for distinguished achievements and contributions.”

The legislation for congressional gold medals allows the US Mint to strike and sell bronze duplicates of the medal for collectors.

Aldrin’s medal was offered housed in its original US Mint case with blue felt lining and a gold-colored rim. The 3-inch, 22-karat gold medal depicts the busts of Glenn, Armstrong, Collins and Aldrin, with a depiction of North America and the famed scene of Aldrin with the US flag on the surface of the moon.

The reverse reads, WE CAME IN PEACE / FOR ALL MANKIND with crescent moon depicted next to a rendition of North America on a globe, along with depictions of Lunar Module Eagle and the Mercury-Atlas. It exceeded its estimate of $ 20,000 to $ 30,000, along with most lots that soared past expectations.

Selling for $ 52,920 on a $ 30,000 to $ 50,000 estimate was Aldrin’s space-flown Apollo 11 Robbins Medallion, Serial Number 433. The .925 fine silver medal measuring 28 millimeters in diameter depicts the mission insignia on the lunar surface on one side – a design used by Frank Gasparro for the reverse of his Eisenhower dollar in 1971 – and the medal’s reverse is engraved with the launch (July 16, 1969), landing (July 20, 1969) and return dates (July 24, 1969). The medals were produced by the Robbins Company to be flown as mementos and were available for purchase by the astronauts.

The offered medal is one of 440 flown on Apollo 11 out of 450 minted and includes a signed provenance letter from Aldrin reading, “This is to certify that the accompanying silver medallion (Serial # 433) was flown aboard the Apollo 11 mission to the moon. and that it is from my personal collection. ”

Aldrin’s 1970 National Geographic Society Hubbard Medal – the society’s highest honor that celebrates outstanding explorations or discoveries – sold for $ 27,720 on a $ 5,000 to $ 8,000 estimate. Sotheby’s notes that the medal had only been awarded 24 times before being presented to the Apollo 11 crew. At the presentation, Vice President Spiro Agnew told the crew that they had “won a place alongside Christopher Columbus in American history.”

More modest was a brass medal produced by North American Rockwell to celebrate the Apollo lunar landing. The obverse depicts a stylized Saturn V launch vehicle, with the text ALDRIN / ARMSTRONG / COLLINS / APOLLO XI around the outside. Sotheby’s noted that North American Rockwell built the Apollo 11 command and service module depicted on the reverse of this commemorative medal. It realized $ 3,780 on a $ 1,200 to $ 1,800 estimate.

The 3 Zodiac Signs Who Are The Luckiest In Love On Wednesday, August 3, 2022