How to Save Terra – Bitcoin Market Journal 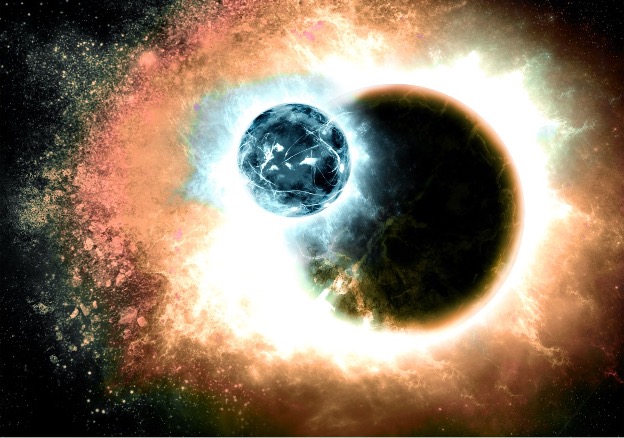 To save the Earth, they’ll have to blow up the Moon.

TerraUSD, the stablecoin that came out of nowhere to attract over $ 18 billion in investor money, recently came crashing down to Earth when it lost its peg to the dollar. This chart says it all: 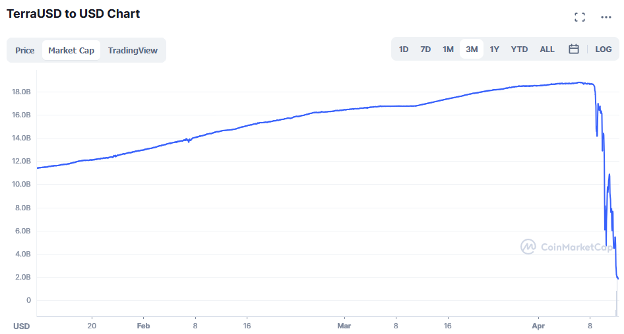 In a drama that engulfed the crypto world, investors rushed to cash out their TerraUSD (also known as UST), as well as the companion token LUNA. It’s an old-fashioned bank run in the newfangled world of cryptocurrency.

Today I will explain what must be done to save TerraUSD. It won’t be easy, but it can be done – and the entire crypto ecosystem will benefit.

The Problems That Generated This Mess

First, a quick recap on how we got here, with lessons learned.

1) TerraUSD was an algorithmic stablecoin backed by nothing but code. As I pointed out a few weeks ago, investors will never trust a code-backed stablecoin as much as they will trust a stablecoin like Tether or USDC, which are backed by actual money.

Algorithmic stablecoins rely on investors on both sides to maintain the price of a dollar. But as Ryan Clements pointed out in his excellent paper Built to Fail: The Inherent Fragility of Algorithmic Stablecoins, they assume a perfect world where everyone behaves rationally. Humans can be wildly irrational.

2) TerraUSD promised 20% returns for holding it in a crypto “bank” called Anchor Protocol. A little research showed that these incredible returns were being paid out by a fund that would eventually run out of money, so the interest rate could not last.

The other warning flag was that Anchor Protocol eventually held about 75% of all TerraUSD: if that “central bank” failed, the entire system was screwed. But it also showed there was not that much to do with TerraUSD, except lock it up for the interest.

3) Terra’s incredible growth was then hyped by crypto media. I subscribe to all the newsletters, and for a few weeks, it’s all anyone was talking about. Terra was growing so quickly that the headlines became an echo chamber, a self-fulfilling prophecy.

The investing newsletters then began running step-by-step guides on how to invest your money in Anchor Protocol to earn 20% interest, thus pouring gasoline on the fire.

4) TerraUSD’s founders then started buying bitcoin as collateral. Why on Earth did they not buy actual dollars? Probably because buying bitcoin was seen as a boss move by the crypto faithful, and crypto newsletters hyped it even more.

5) As a “decentralized” stablecoin, the governance community went into chaos. The trend in crypto is to “decentralize” projects so the SEC won’t be able to hold anyone accountable. This means “the community runs the project,” which sounds great in theory but is a disaster in a crisis.

Decentralized communities are slow and indecisive; centralized teams can take quick action. In the US, we learned this lesson over a hundred years ago, when we formed the Federal Reserve System, which is balanced by a decentralized central bank.

So when quick action was needed with Terra, two things happened.

First, everyone looked to TerraUSD founder (and pitchman) Do Kwon for a solution. This showed that neither TerraUSD, nor crypto in general, is really decentralized: in times of crisis, we look to a figurehead.

Simultaneously, the governance forum (where community proposals are shared, voted, and passed) went into chaos. Seriously, visit the forum to see how decentralized leadership works during a crisis: it’s madness.

These are some of the lessons we can learn from the TerraUSD saga, both as crypto investors and founders.

But let’s not criticize the bad without proposing something better. Here’s how TerraUSD can be saved.

To Save the Earth, Blow Up the Moon

Here’s the TL; DR version of my proposal.

Meanwhile, the price of LUNA is effectively zero. I suggest shutting down LUNA entirely, permanently burning the entire LUNA supply. This will not be popular, but neither is what is happening now.

Simultaneously, I propose cashing out the $ 1B + of TerraUSD stablecoin that still remains in the bankand convert it to actual money deposited in an actual bank.

In other words, convert whatever still remains in TerraUSD into US dollars, then relaunch Terra as a more modest, but fully-collateralized stablecoin.

Next, redistribute the new stablecoin back to former TerraUSD holders, in proportion to the amount they held.. Effectively, this is like a distressed bank paying out 25 cents on the dollar. Everyone will take a haircut, but everyone gets back proportionally what they put in.

To be sure, there are many details to be worked out with this plan. That is presumably the work of the Luna Foundation Guard, the team of six guys who got everyone into this mess.

I know these six guys have been working nonstop on this problem, but this is their opportunity to set things right. Make a stablecoin that’s backed by money, and do it for free.

The members of the Luna Foundation Guard should forfeit all personal holdings of LUNA and TerraUSD, and agree to work for a salary of $ 1. This would also be an excellent “good faith” move against the lawsuits that will be coming.

Alternately, the Terra decentralized community can presumably vote out any member of the Luna Foundation Guard – or, maybe, all six. They can clean house, bring in new management, and start fresh.

These are all difficult decisions, but they will save Terra (though, unfortunately, not LUNA).

Of course, there will still be a long road ahead to figure out good uses for Terra. They’ll need to attract developers to build great products that use Terra, amazing apps that provide real-world value. But that’s the case with any blockchain project.

There’s a final reason to set TerraUSD straight: lawmakers are watching this story closely. US investors who got burned by Terra are going to complain to Congress, who will finally get off their pork butts and do something about crypto.

If we can regulate ourselves – try to make things better where we’ve all screwed up – then we can help shape good regulation.

But if we try some new cockamamie scheme to pump up the price of LUNA, such as those being proposed in the governance forum, we’re all screwed.

We got ourselves into this mess, and we need to work together to learn from it. We need to make things right. We need to do better.

Let’s do better, together.