April 12 (Reuters) – A crypto platform’s pledge to amass $ 10 billion worth of bitcoin to back its own “stablecoin” is firing up the market. It’s part of a wider movement to crown bitcoin as the reserve currency of a new age.

Seoul-based Terraform Labs has so far built up nearly 40,000 bitcoin worth $ 1.7 billion in a series of purchases via a non-profit affiliate, Luna Foundation Guard, according to publicly available blockchain data.

The spree follows Terraform co-founder Do Kwon’s announcement on Twitter last month that the project would buy the $ 10 billion worth of bitcoin reserves to underpin TerraUSD, breaking ranks with other large stablecoins – a ballooning class of cryptocurrencies that aim to minimize wild price swings and are typically backed by US dollar reserves.

A stablecoin backed by bitcoin reserves, according to Kwon, “will open a new monetary era of the Bitcoin standard”, referencing the gold standard that formed the backbone of global finance about a century ago.

The acquisitions, and the anticipation of more to come, are supporting the price of bitcoin, with some market players identifying them as a big driver of bitcoin’s climb back towards $ 48,000 at the end of March. More significant, perhaps, is whether others will follow Terraform’s lead.

“Buying $ 10 billion worth can move the price in the short term,” said Sid Powell, CEO of Sydney-based crypto lender Maple Finance. “But over the longer period, it’s more what it signals – that bitcoin has been introduced as the hottest form of collateral backing for currencies.”

Yet other market participants cautioned that an ever-closer embrace between bitcoin and stablecoins like TerraUSD could introduce a new risk for crypto markets that raised the prospect of a “death spiral” for investors down the line.

Either way, it’ll be worth watching.

In the short term, too, there are pitfalls.

“There is a danger some people are trying to position long ahead of the buying which could exaggerate a fall if the price starts to retrace,” said Richard Usher, head of OTC trading at crypto firm BCB Group in London, who attributed bitcoin’s gains last month to an improving risk environment.

Vetle Lunde, analyst at Norway-based crypto research firm Arcane Research who is tracking the Terra project purchases, estimates that, to reach $ 10 billion in reserves, it could eventually hold between 60,000 to 70,000 bitcoin.

That would surpass Tesla’s (TSLA.O) 43,200 bitcoin, the public company with the second largest bitcoin stockpile behind MicroStrategy (MSTR.O).

Terraform Labs did not respond to a request for comment. 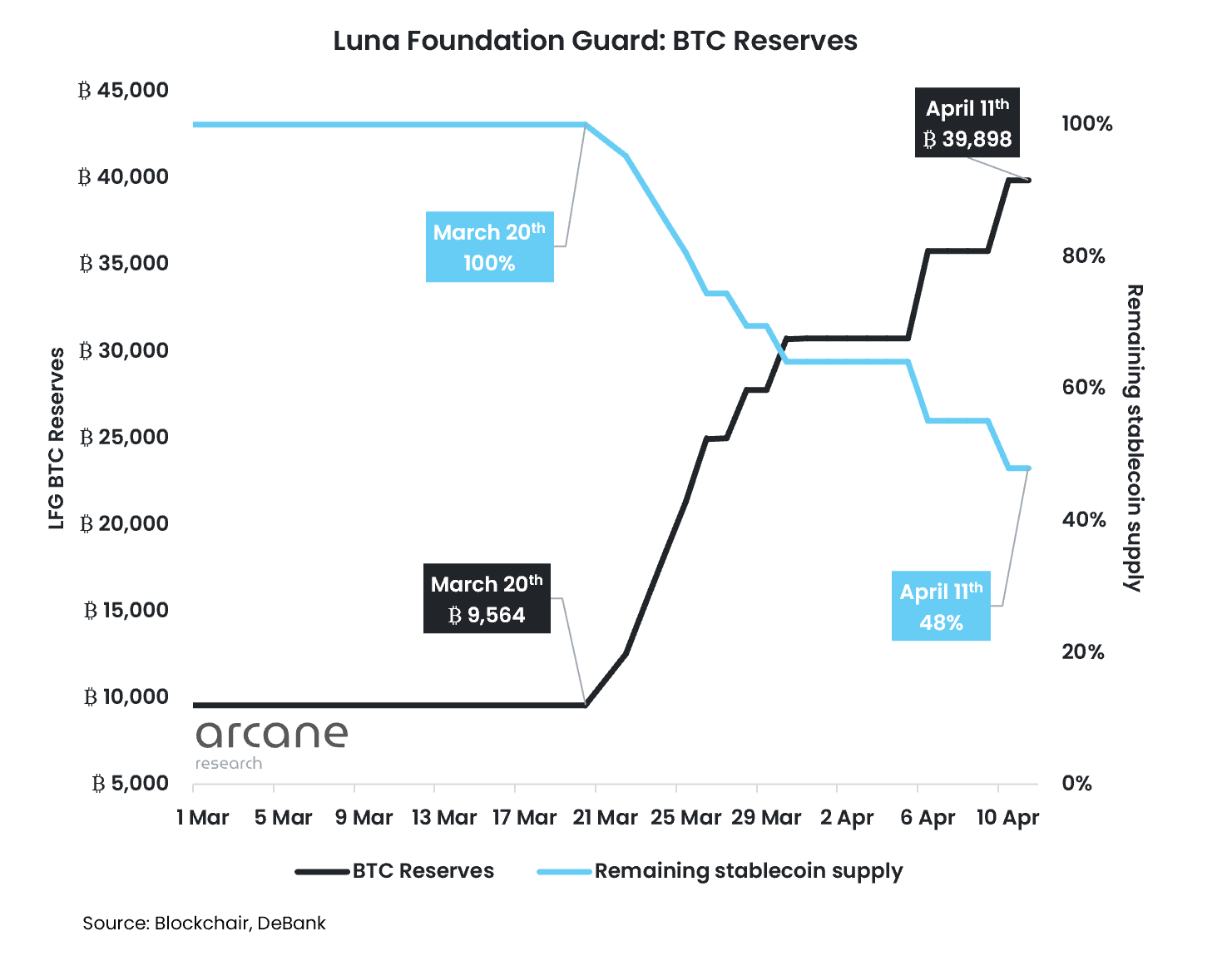 Stablecoins are rapidly gaining ground. They’re a common medium of exchange and often used by traders seeking to move funds around and speculate on other cryptocurrencies.

For example, it is much easier to swap tether – the biggest and most mature stablecoin – for bitcoin or other crypto, than it is to swap US dollars for bitcoin.

TerraUSD is now the fourth-largest stablecoin and, like its peers, is pegged to the dollar. However, while the likes of Tether and USD Coin have reserves in traditional assets which they say match the value of tokens in circulation, TerraUSD maintains its 1: 1 dollar peg through an algorithm that moderates supply and demand in a complex process that involves the use of another balancing token, Luna.

The bitcoin reserves theoretically add another level of reassurance, while keeping the Terra project decentralized.

“Backing it with something as predictable – not from a price perspective but from a rules and governing perspective – as bitcoin brings a lot of confidence to people,” said Matthew Sigel, head of digital assets research at VanEck in New York.

He said he expected other algorithmic stablecoins to follow Terra’s lead and back up their coins with reserves of bitcoin, and even other crypto tokens, if the experiment succeeds.

However, not all algorithmic stable coins have been stable in the past, with some losing their peg and collapsing in value.

“There is still much work to be done and regulatory uncertainties to overcome regarding algorithmic stablecoins and their resistance to a collapse in contractions, which might cause a so-called ‘death spiral’,” said Carlos Gonzalez Campo, an analyst at 21Shares in Switzerland. .

“This phenomenon refers to a theoretical vicious circle where UST (TerraUSD) contraction leads to LUNA being minted and declining in price, which leads to fear and more UST redemptions,” he said, comparing this to a bank run.

This is what the bitcoin reserve is meant to avoid, but it could also cause wider contagion.

“It’s far better to have some reserve outside of luna because otherwise you’re very exposed to its performance and that can make everything break as we’ve seen with other algorithmic stablecoins,” said Arcane’s Lunde.

“But I’m a bit concerned about the long-term structural effects this may have on luna and on bitcoin. If things really start to break up, and they have 70,000 bitcoin in reserves they want to use to settle the market and maintain the peg, it might have implications for the entire market. “