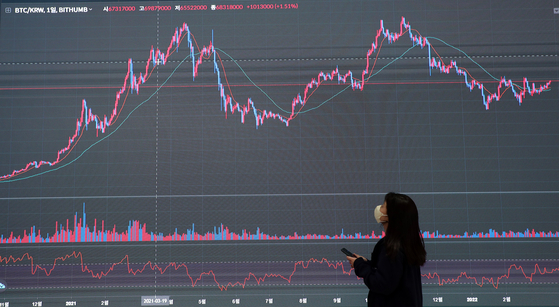 An electronic display board at the Bithumb office in Gangnam, southern Seoul, shows bitcoin volatility on March 25, when the travel rule was enforced in Korea. [NEWS1]

The “travel rule” for crypto transactions has been in effect for two weeks, and critics argue that it could weaken the local market by starving it of much-needed liquidity.

The travel rule is an asset-tracking recommendation from the Financial Action Task Force, a global anti-money laundering body. The goal is to help authorities track the movement of virtual assets – such as cryptocurrencies – between crypto exchanges to combat money laundering and terrorist financing. Under the rule, exchanges are required to share information about investors that send and receive crypto.

Korea incorporated the recommendation into a law that requires exchanges to flag any crypto transfers worth 1 million won ($ 830) or more. Korea is an early adopter of the rule.

While the rule has been implemented in a number of major economies – such as Canada and Swiss – it has not been adopted in most jurisdictions.

“Cooperation among different countries and international organizations should have been achieved before Korea made the rule effective,” said Park Sung-Jun, CEO at Andus, which operates the AndUsChain blockchain platform. He added that more countries should enforce the regulation for the travel rule to be able to serve its purpose.

Park said the technical incompleteness of crypto transfers among crypto exchanges is another reason Korea should have been more patient about implementing the travel rule.

Korea’s crypto market was worth more than 300 trillion won at the end of 2021, about 8 percent of the total global market, according to a February report from Boston Consulting Group Korea. It projects Korea’s virtual asset market to reach 1,000 trillion won by 2026.

Domestically, crypto transfers above 1 million won from Upbit, the largest crypto exchange in Korea, to Bithumb, Coinone or Korbit – three other exchanges fully licensed in Korea – are not possible because the systems they use to deal with travel rule requirements are incompatible.

From April 25, the systems will be able to communicate and transfer the required customer data.

Internationally, the situation is more restrictive. Transfers above 1 million won can only be made to crypto accounts overseas owned by the sender.

The domestic exchanges said they will expand the number of overseas crypto platforms that are connected to their service.

Before the travel rule, a domestic individual could transfer crypto to anyone overseas with a verified account. But following the regulation, domestic crypto investors can only send crypto to their own account overseas because foreign crypto platforms have not yet adopted travel rule solutions on their services. They are not mandated to share personal information about their users back to domestic exchanges.

“Liquidity is the key to crypto assets because it’s a global market, but the travel rule could trap the virtual assets inside the domestic market until the service is widely linked to overseas platforms,” ​​said an source at a Korean exchange who declined to be identified. . “That could isolate domestic exchanges from the international market. There is no reason for the privacy-conscious overseas platforms to apply the rule immediately.”

Under the Moon Jae-in administration, “the government has been very determined to regulate the crypto market, and the travel rule was a good justification to strengthen that sentiment,” said Park from Andus. “Even countries with large crypto markets are very cautious about adopting travel rule.”

India has 100 million crypto users, the United States 27 million and Nigeria 13 million, according to TripleA, a cryptocurrency payment gateway based in Singapore.

The government prohibited fundraising via crypto in September 2017, the second country after China to do so. Danal’s Paycoin and Kakao’s Klaytn undertook initial coin offerings in Singapore.

The government originally planned to impose a 20-percent tax on crypto gains of 2.5 million won or more starting in January this year, though the plan has been pushed to start in 2023 until the system is more prepared.

“The travel rule was on the list of anti-money laundering regulations that were included in the Special Financial Transaction Act,” designed to prevent money laundering, said Jung Yeon-su, a spokesperson for the Financial Service Commission. “It was enforced with another set of regulations from the act, which was revised last year.”

An obligation to confirm a person’s identity before opening an account is one of the regulations included in the act.

“New forms of finance are being created in the 21st century based on blockchain, like flash loans,” said Kim Hyoung-joong, a professor of multimedia security at Korea University School of Cybersecurity.

A flash loan is a form of unsecured lending that has become popular across decentralized finance protocols. It can be used for arbitrage and for collateral swaps.

“Regulating the crypto market without having much knowledge about this industry means Korea will miss out an opportunity to lead global finance in the 21st century,” Kim added.

“The reasons investors use overseas crypto exchanges is because they want to invest in coins that cannot be traded on domestic exchanges or trade crypto futures or leveraged crypto,” said Kim Byung-chul, a spokesperson for Dunamu, which operates Upbit. “So the key is whether domestic crypto users can transfer coins to Binance,” the largest crypto exchange, where the trading of crypto derivatives is possible.

He added that the impact of the travel rule is limited because most investors in Korea simply buy and sell cryptocurrencies within a single exchange.

The application of the travel rule on crypto indicates that cryptocurrency is going mainstream.

Real-name finance was introduced at banks in Korea in 1993, prohibiting individuals from engaging in financial transactions, like creating an account, in other people’s names.

“That rule has now been expanded to crypto, and this indicates the crypto market has been incorporated into the mainstream finance system,” Kim added.

After years of intense regulations on virtual assets, there are hopes Korea’s crypto market may be deregulated under the new administration.

President-elect Yoon Suk-yeol, who will be inaugurated on May 10, pledged to allow initial coin offering and vowed not to impose taxes on cryptocurrency trading gains of up to 50 million won, treating them the same as stock gains.

Yoon will be able to implement part of his cryptocurrency policy through presidential orders, but tax changes require the National Assembly to revise a tax law. The legislature will also require a bill to set up an agency to regulate digital assets.

“We can not be sure how crypto will be treated under the incoming administration.” said Korea University’s Kim. “But the difference between the Moon Jae-in administration is that the president did not mention anything about virtual assets, while Yoon proposed favorable policies.”

Kim added that the creation of a new government agency that takes charge of virtual assets is key. The Korea Financial Intelligence Unit (KoFIU) is part of the Financial Supervisory Service and monitors efforts to stop money laundering and terrorism financing.

“For Korea to lead the market, private efforts and policy are both important,” said Kim Yun-joo, managing director & partner at Boston Consulting Group. “It is time to consider industrial development rather than regulations. Over the next five years, there will be an intense borderless competition on who will become the next Google or Amazon of the virtual asset industry.”