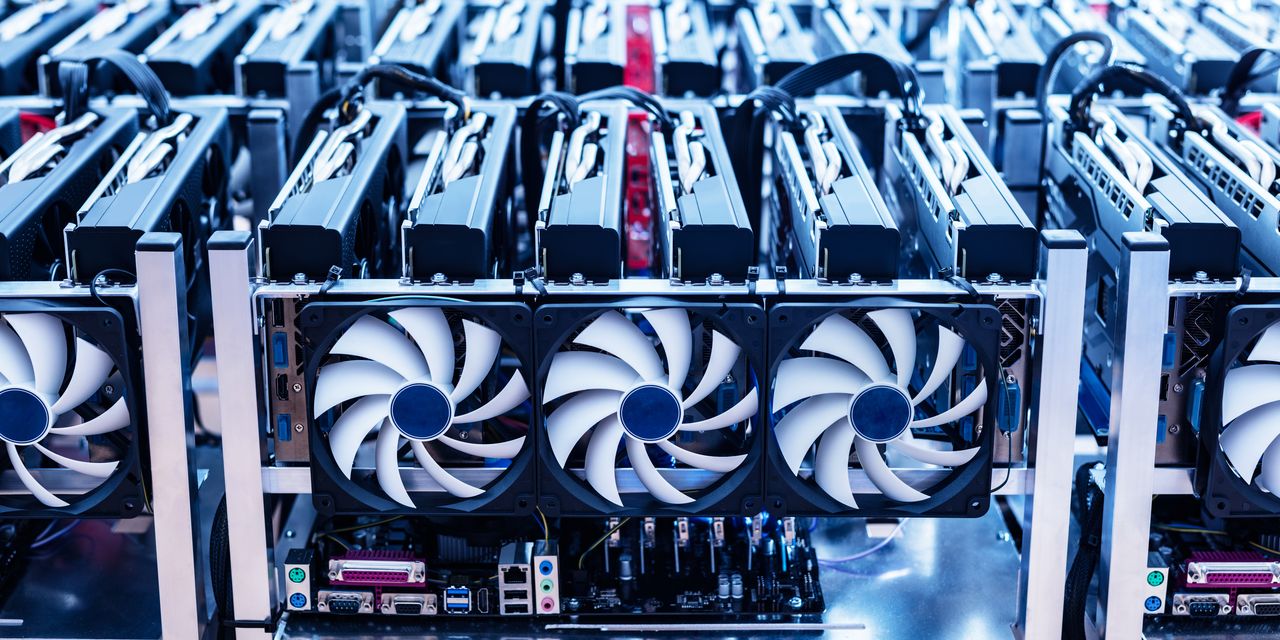 
Bitcoin was trading at around $ 43,400 on Monday, gaining 5% and fueling a rally in crypto-related stocks. The miners look particularly cheap, one analyst says, arguing the market is overlooking their large and growing stash of Bitcoins.

With Bitcoin crossing its 50-day moving average of $ 42,840, the next stop could be $ 47,600, according to Fairlead Strategies analyst Katie Stockton. She writes that she would “tread carefully” due to Bitcoin’s “loss of long-term momentum,” according to a note published on Monday.

Crypto-related equities are going along for the ride.

exchange-traded fund (BLOK) was up nearly 4%.

Also faring well are Bitcoin miners — companies that run vast troves of computers in a race to process blocks of Bitcoin transactions, earning fees and rewards in Bitcoin if they succeed in validating blocks.

A morning briefing on what you need to know in the day ahead, including exclusive commentary from Barron’s and MarketWatch writers.

Granted, these stocks are rising off a deeply depressed base. Marathon and Riot are down 40% to 60% in the last three months. Core merged with a special-purpose acquisition company (SPAC) on Jan. 20. It’s down 40% from highs last November, based on prices for its prior SPAC.

“With the stocks at these levels, the miners offer a superior risk / reward to the underlying BTC as we see limited downside from here, barring a complete BTC collapse sub- $ 10,000,” Brendler wrote in a recent note.

One reason the stocks look inexpensive is that the companies are accumulating Bitcoin on their balance sheets — building a digital-asset base. Brendler calls Marathon his top pick, partly because the company should have nearly $ 2 billion in Bitcoin on its balance sheet by the end of 2023, assuming a price per coin of $ 42,000. That would represent 83% of Marathon’s current market cap of $ 2.4 billion. He reiterated a $ 65 target on the stock on Monday, representing gains of about 150% from recent prices around $ 26.

Core also looks cheap, in his view, worth $ 18 a share, well above recent prices around $ 10. Core said on Monday that it produced 1,077 bitcoins in January, taking the company’s total to 6,373 bitcoins mined from operations. At recent market prices for Bitcoin, that was worth $ 277 million, nearly 10% of Core’s market cap of $ 3.1 billion.

Granted, the stocks face a tough macro climate with rising interest rates and tighter global liquidity as the Federal Reserve imposes stricter monetary policies. Tech stocks with cash flows expected far in the future get discounted more heavily as rates rise, since they lower the present value of their future cash flows.

Miners also face institutional-investor skepticism that their business models are sustainable. While mining may be profitable now, the bear case is that miners will face increasing competition for a dwindling supply of Bitcoin with the network software designed to halve the total reward per block mined in 2024 from 6.25 Bitcoins currently to 3,125.

“We firmly believe current miner valuations have little to do with fundamentals and more due to the lack of institutional buy-in to this relatively obscurenew sector,” Brendler said in a note on Monday.

The miners and other crypto-related stocks may be worth a trade; holding them long term requires faith that Bitcoin’s price will rise more than enough to compensate for lower mining rewards about two years from now.

Write to Daren Fonda at daren.fonda@barrons.com