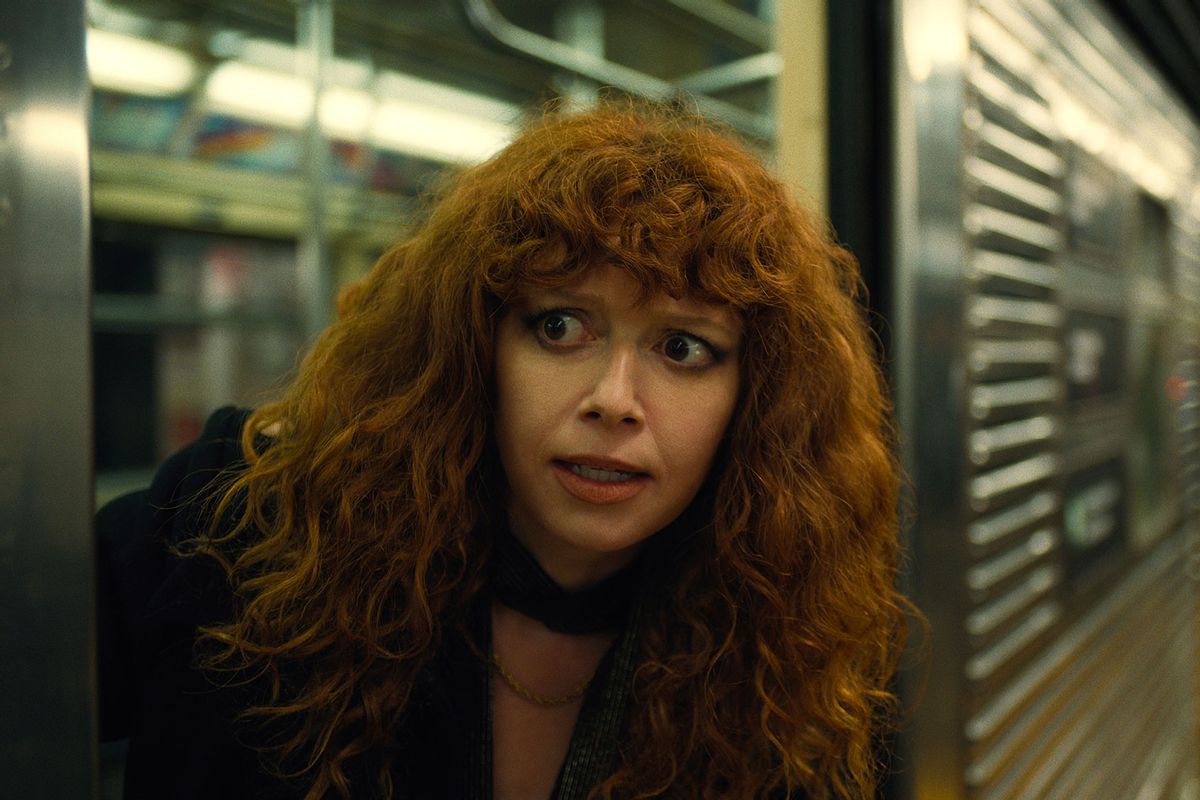 In 2019, many of us may have had a catchy song from the early ’70s stuck on a loop in our heads. The song was “Gotta Get Up” by Harry Nilsson and the reason for the earwig was “Russian Doll,” the series created by Natasha Lyonne, Leslye Headland and Amy Poehler that stars Lyonne as a trash-talking, chain-smoking New Yorker with a heart of gold (medallion) who keeps dying.

Related: Yes, “Russian Doll” is worth the hype

It’s 2022, and “Russian Doll” is back, baby! The much-loved and examined show returns for a second season on Netflix. And while it’s tempting to dive right back in, this is a complex, intense story and one that it may be hard to just tune into without a refresher. A lot has happened since 2019. We’ve all experienced time loops of our own.

What do you need to know to return to the nesting masterpiece that is “Russian Doll”? Here’s a primer:

This is not your average “Groundhog Day.”

“Russian Doll” begins – and keeps beginning – with the 36th birthday party of Lyonne’s character, Nadia. Her friend, the delightful Maxine (Greta Lee) is throwing her a lavish birthday party in Maxine’s apartment and greets Nadia with the line “Sweet birthday baby!” Everything seems fine, though decadent, for a time. Then Nadia is struck and killed by a taxi while chasing after her somewhat feral cat, Oatmeal.

Nadia’s death is only the beginning. It’s only her first death, and she keeps dying, though in different ways. When her ex saves her from the taxi and Nadia gets Oatmeal back but the cat disappears from her arms, she falls to her death. She also falls down stairs, falls into open sidewalk cellar doors, dies in car accidents, freezes to death.

After every death, Nadia wakes up back in Maxine’s cool bathroom with a glowing geode on the door and a gun-shaped door handle. That’s not symbolism or anything. The party rages on behind Nadia, and no one else (at first) seems to understand that time is repeating.

“I die all the time,” he tells Nadia flatly, a great line in a show of great lines.

But this is not your average “Groundhog Day.” The more time repeats itself, the more things start to erode, disappear. Fruit and flowers rot. And it turns out Nadia is not alone in repeating the worst and last day of her life. 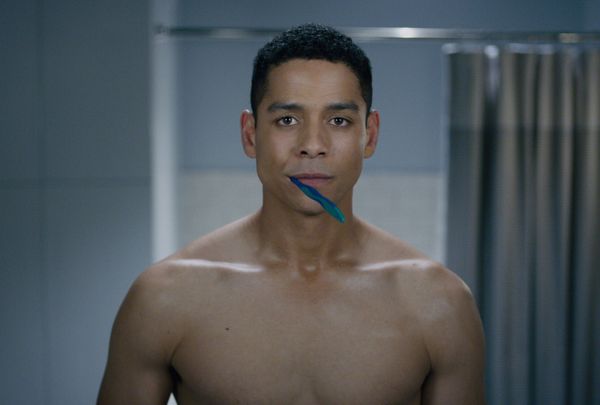 Charlie Barnett in “Russian Doll” (Netflix)Shortly before one of her deaths, this time in a plummeting elevator, Nadia meets Alan (Charlie Barnett), who understands what’s happening because it’s happened to him. “I die all the time,” he tells Nadia flatly, a great line in a show of great lines. Stuck in a time loop too, Alan and Nadia eventually join forces to figure out what the heck is going on with both of them.

The day before his first death, Alan had planned to propose to his girlfriend Beatrice (“Orange Is the New Black” star Dascha Polanco) but she broke up with him. In some timelines, she admits she has been cheating on him with her professor. Alan eventually remembers his first death was the result of suicide.

After rejecting a lot of theories – they keep repeating their deaths because they’re bad people, it’s a terrible drug trip, or Maxine’s apartment (a former Yeshiva school) is haunted – Nadia and Alan realize they crossed paths briefly before they died. And in order to stop dying, they need to help each other.

In this mix, we have some wonderful supporting characters, some of whom have larger roles in the second season. Ruth (Elizabeth Ashley) is a standout and one to remember. A therapist who practices EMDR, Ruth acts as Nadia’s confidant. In her gravelly, wise voice, Ruth gives tough love advice and at one low point, helps get Nadia hospitalized for mental illness (but, would not you know it, the ambulance never makes it to the hospital).

They’re good friends to each other, despite the generational divide. Ruthie is a longtime family friend; she helped Nadia’s mother, Lenora (Chloë Sevigny) too, and eventually took in Nadia as a child when Lenora lost custody. Lenora never made it to her 36th birthday.

“This was always going to be a tough birthday,” Ruth tells Nadia at her party for her own 36th. Nadia answers: “Not everything is about Mom.”

But a lot is. Nadia had a difficult childhood. Her mom smashed mirrors in a fit of rage. She once obsessively bought watermelons. In one time loop, Nadia sees herself as a child, and child Nadia says to her: “This is the day we get free.”

Her only inheritance? One gold medallion she wears around her neck.

We are not given an explicit diagnosis for Lenora, but her instability and violence unmoored Nadia. As The Atlantic wrote, Nadia’s “great fear is that she shares that condition.” It’s a fear that ran like an electric undercurrent through the first season. “Nadia might or might not have a diagnosable condition, but inherited trauma like hers is the sort of thing that psychology and psychiatry seeks to treat.”

Nadia’s favorite childhood book was “Emily of New Moon” by LM Montgomery, which comes up a lot in the first season of “Russian Doll.” Like a darker “Anne of Green Gables,” Montgomery’s novel, part of a series, is about a young girl who dreams of being a writer, despite her hard life (I remember being particularly upset as a child by a part in the book where Emily burns her journal to prevent her aunts from reading it again). Abused and neglected, Emily’s best friend is her reflection in the mirror. You can see the “Russian Doll” parallels already.

Like Emily, Nadia was orphaned. Her only inheritance? One gold medallion she wears around her neck. 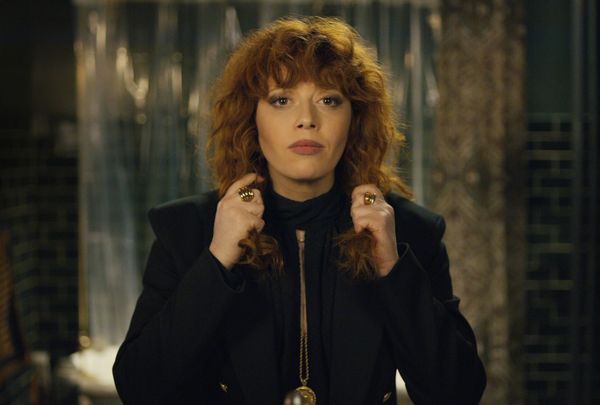 Natasha Lyonne on “Russian Doll” (Netflix)The necklace is the last of the gold her Holocaust-survivor grandmother turned all the family’s remaining valuables into after the war. She converted them into Krugerrands, a type of gold coin first minted in South Africa in 1967. Nadia explains to Alan: “You know, most survivors were a little bit paranoid about putting their money in banks, so my grandparents acquired 150 of these babies. . “

But as a young woman, Nadia’s mother stole the Krugerrands from her own mother, and spent them all. The gold was supposed to be for Nadia’s college fund, but the one around Nadia’s neck is the only Krugerrand left.

Want a daily wrap-up of all the news and commentary Salon has to offer? Subscribe to our morning newsletter, Crash Course.

As Hey Alma wrote, “The darkness of this – Nadia’s grandparents survived the Holocaust, but no longer trusted anyone, and their daughter, Nadia’s mother, wasted all their money – is what makes this show so fundamentally Jewish.”