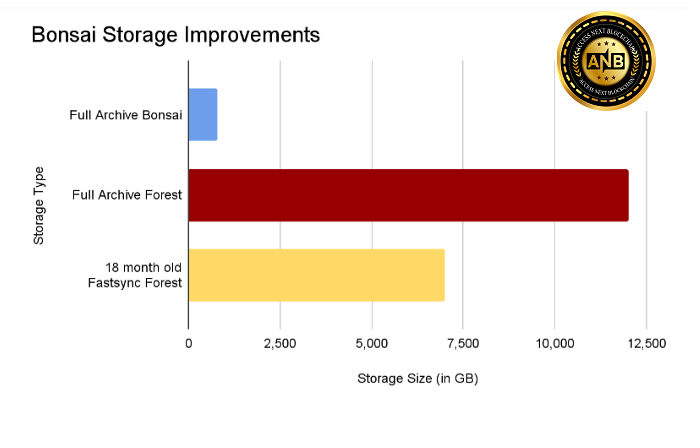 LONDON, Feb. 11, 2022 (GLOBE NEWSWIRE) – Recently, ANB announced its achievements in integrating Bonsai Tries data storage. The team at ANB has been thinking about how blockchain can provide solutions to the current issues facing blockchains and has devised a solution they are calling Bonsai Tries.

ANB is the first blockchain to integrate Bonsai Tries data storage, a promising new technology that many crypto enthusiasts have excited about as the future of blockchain storage technology.

It is a blockchain with a cryptocurrency named ANBcoin and has its own IBFT protocol algorithm, Bonsai Tries data storage, Advance PoS consensus, Permissionless, and On-Governance.Compared to other blockchains, ANB is mission and vision-oriented to support the community by providing different programs and ways of earning through its projects and developments in the future.

A brief introduction to Bonsai Tries

What it is, what it does, and why it matters in our world today. Most importantly, how does integrating Bonsai Tries benefit ANB?

People can look at some examples of real-world use cases that show how efficiency, costs, and access can be improved by leveraging Bonsai Tries as a permanent record to store critical information instead of using ephemeral methods such as blockchains.

This will include a brief overview of proof-of-existence along with concepts from bitcoin like UTXOs and scripts.

The proof-of-existence aspect allows users to prove later on whether or not they have been tampering with their records for any reason – say, for example, if users were trying to forge something or if someone tried to tamper with their system – since their action would’ve left behind an indelible mark.

How will ANB use Bonsai Tries?

Due to ANBs small block size, storing large amounts of data on its blockchain will be very inefficient and slow.

To solve that problem, they plan to integrate Bonsai Tries into their network, which will allow them to store terabytes of data efficiently and confirm transactions much faster than a typical Ethereum / bitcoin block size would allow it too.

This allows for scalabilities and high volume use cases, such as decentralizing information in projects without compromising security or performance.

Nevertheless, to take the opportunity to be a member of ANB family users may hold some coins because they never know, they might get a huge return. Developers are working to make things nice and fantastic for the ANB community.

Are there any other benefits users can get from integrating Bonasi tries?

Bonsai tree trie has numerous other benefits and provides a solution for storing large amounts of data on-chain.

In addition, because Bonsai trees can store many items with associated metadata, they help provide greater flexibility and extensibility for developers who can build upon them with greater ease than traditional smart contracts or dApps.

Finally, if users find themselves looking to invest in a blockchain, they can do that on the ANB blockchain platform. Thus they can make a huge profit within a very short time without compromising safety.

Using a website or desktop application, users can access their ANB and start using a decentralized platform that takes advantage of its unique features.

Many projects have already started building on top of ANB. Still, it’s also open for anyone to build new services or applications on it if they see fit!

Users can start with their easy-to-use platforms and their libraries to get started in minutes (if not seconds).

Check out their community forum, too — it’s full of great questions that developers just like users have been asking!

Why is decentralized data storage important?

Security is one of the most important aspects of a sustainable service or product, no matter what its nature might be.

If someone creates a system in which there’s an access point to information that could easily be breached, its project won’t last long.

That’s why it’s vital that decentralized data storage solutions like these reach every sector of business and industry as soon as possible – with solid integration methods like ANB provides here.

Without such security measures, new technologies (like blockchain) will always lack widespread adoption.

The Benefits of Decentralized Data Storage like Bonsai tries

With centralized services, users’ data can be vulnerable, and there is always someone in charge (or several companies) with access to that information.

Decentralized solutions like Bonsai tries to have no single point of failure, which means users have full control over their own data and its security.

This makes for a much more reliable system that users won’t need to worry about being exploited by hackers or governments in a time of crisis.

The best thing about decentralized data storage is that users do not even know it exists! The systems are completely transparent and immutable, so they will continue to work flawlessly as long as people continue to use them.

As an added bonus: Bonsai-Tries blockchain has great scalability too.