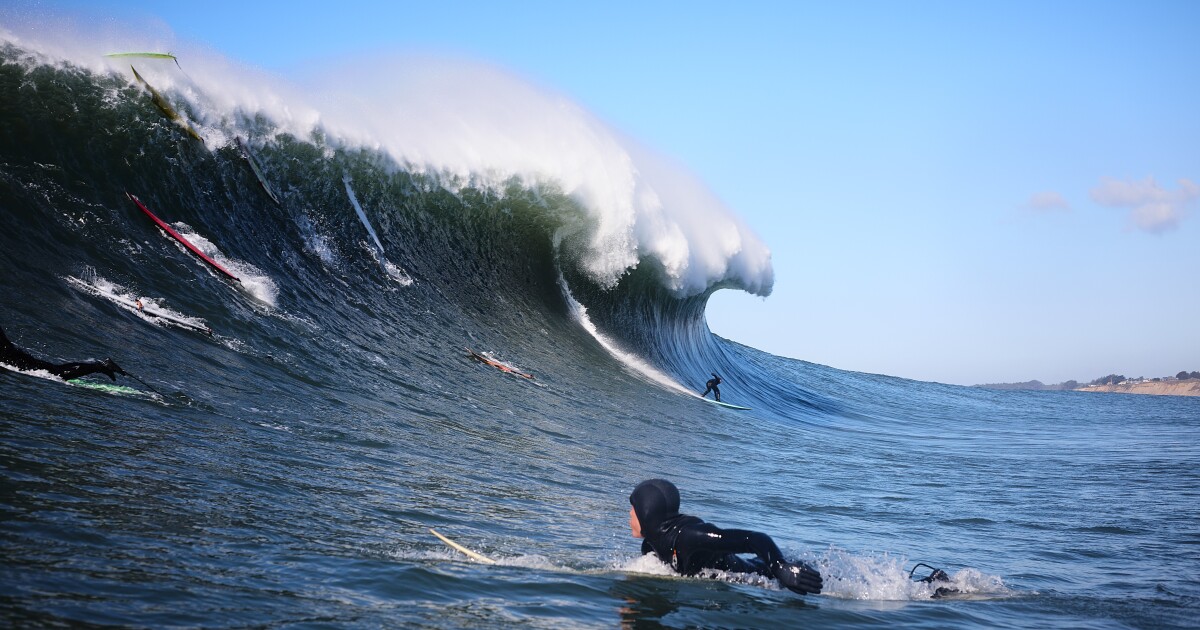 Derek Dunfee’s dream came true, and then it almost killed him.

Growing up in La Jolla, all he wanted to do was surf. He was good at it. By 13, he had a sponsorship from clothing company Volcom, which sent him to Hawaii’s storied North Shore, a proving ground for young hotshots.

The waves were huge. Intimidated at first, Dunfee got nudged into the water by one of his idols, a Sunset Beach veteran, and found out that he loved every part of it.

He loved the power of the ocean, the thrill of the tube rides, the camaraderie of the lineup. Loved being on the cover of Surfer magazine. Loved the travel to exotic surf breaks. Loved winning the coveted Billabong XXL prize (and $ 15,000) for riding a 40-foot monster at Mavericks near Half Moon Bay.

He loved it all so much that he ignored the concussions.

His first one came in 2007, also at Mavericks. He was trying a lighter board and got launched into the air when he took off on a wave. He remembers the water feeling like a brick wall when he hit, and then the brick wall fell on him. His board broke into three pieces.

There were other concussions as the years went by, and with them a recurring aftermath. Nausea. Headaches. Painful stabs from bright lights. Memory loss. Mood swings. Fits of rage or sadness.

Then the waves called to him again, and out he went. “I was at the top of my game,” he said. “I did not want to give that up.”

On Dec. 22, 2012, Dunfee was at Cortes Bank, a barely submerged seamount about 100 miles west of Point Loma. It’s Mt. Everest for surfers, capable of generating waves that approach 100 feet. Dunfee took off on one beast that folded back and buried him.

Tumbling around under water, 10 seconds went by. Then more. “Keep fighting,” he remembered thinking. “Stay conscious and you’re going to make it.”

He surfaced in time to be sent over the falls on a 20-footer. “Just hold on,” he told himself, a mantra that had gotten him through other wipeouts.

This one was different. His chest burned at the lack of oxygen. His voice of encouragement faded. His body went limp.

Ten minutes later, a rescuer on a jet ski found him half a mile away from the whitewater line, floating on his side along the edge of a reef. He was barely conscious.

He spent the rest of the day on a boat in a daze. Outwardly, he shrugged it off as just another bad spill. Inwardly, he feels otherwise.

Spend much time on the internet looking at surfing videos and two main categories emerge.

One shows riders carving clean lines across the faces of waves, triumph etched on their faces as they kick out into calmer waters at the end. The other shows riders crashing, limbs flailing, their boards sometimes popping up before they do – straight up, like tombstones.

The surfing world celebrates both kinds of outcomes. It’s possible for a rider to win trophies for each. Dunfee’s done it, capturing the Billabong XXL Big Wave Award in 2009 and the Surfer Poll Worst Wipeout of the Year in 2010.

That both success and failure are treated with fanfare – two sides of the same coin – helps explain why Dunfee never heard much about concussions when he was coming up in the sport. Hard knocks were an accepted part of the price you paid.

But that’s changing. Dunfee, who turned 39 in December, is among a growing chorus of surfers raising awareness about head injuries in the sport.

Last year, he published a book, “Waking Up In the Sea,” about the highs and lows of his career. He’s appeared on surfing podcasts, talking about the cumulative effects of what he estimates were dozens of concussions large and small. He’s used Instagram to post updates about his medical condition and his decision to walk away from big-wave surfing.

The openness is making a difference, said Shawn Dollar, another big-wave surfer from Northern California who’s had to pull back because of concussions.

“It’s becoming a lot easier for people in the sport to talk about it,” he said. “It’s not yet common sense for them to recognize that concussions happen, but it’s getting close.”

Researchers are paying attention, too, and drawing parallels to the kinds of long-term injuries suffered by football players. They note that surfing has exploded in popularity, with participation almost tripling from 13 million riders to 37 million between 2010 and 2020.

Most of the studies have been survey-based. In one, 91% of surfers said they had sustained an injury at some point in their lives, with head injuries the most prevalent.

A 2020 study in the Journal of Orthopedics took it beyond self-reporting and looked at 15 years of US emergency room activity. It found 34,337 surfing-related head injuries.

Lacerations were the most common wound, followed by blunt head trauma and concussions. Overall, the number of head injuries over the 15 years had remained stable – but the incidence of concussions “increased significantly.”

The study authors noted that because an estimated 50% of concussions never get reported, the actual numbers are probably far higher.

Some of the rise was due to better diagnoses by clinicians, but another factor was design changes that have made boards faster and more maneuverable – and also easier to fall off.

Not many surfers wear helmets – in one 2015 survey, only two of 50 participants did – although that may be changing, too. Several big-wave riders are donning them, and if younger surfers see their heroes in them, usage could increase.

“It’ll be like a lot of sports where the norm is not wearing it, then a lot of guys will end up brain-dead and dumb and you’ll start to see a transition,” surfer Albee Layer told the digital surfing magazine Staff. He began wearing a helmet after a serious concussion.

But others worry that helmets may give a false sense of security to a group of people already prone to taking risks as they push the boundaries of what’s possible.

Sponsorships, magazine spreads, contest invitations – those come only if you get noticed. One surfer, talking in a video about the Worst Wipeout Award, muses that, if you want to win, “you should probably come pretty close to death.”

Been there, done that for Dunfee.

Almost every night, he has the same dream.

He’s under water in a wet suit, flailing to get to the surface. He can not reach it. His lungs ache for air in the blackness. Then his panic subsides and the water envelops him like a blanket, nudging him toward eternal rest.

That’s when Dunfee wakes up, covered in sweat, his mouth tasting of metal from grinding his teeth.

It’s giving up that haunts him, a mixture of relief and despair, the recognition that something he worked so hard at is over. He’s not going to be the best big-wave surfer in the world anymore, with all its glories. And its dangers.

He still surfs, every day if possible. Windansea Beach is nearly in his backyard, so he can walk over with his board. Many mornings, he puts his wetsuit on before he leaves the house, not worried about the waves being good. He’s going in regardless.

“It’s something I’ve loved since the first time I did it,” Dunfee said on a recent weekday morning, gazing out at the ocean. “It’s the one place I feel all my happiness.”

His right eye is a continuing problem, an after-effect of the concussions. It does not focus well, especially if his head is moving. He does regular eye exercises and plays the piano to improve his hand-to-eye coordination.

The eye trouble makes it hard for him to pursue another passion, photography. Taking pictures was an insurance policy he arrived at when the concussions began piling up, a hedge against his fear of permanent memory loss. He went out on his board with his camera. Many of the pictures in his book were taken by him.

“The more I document,” he wrote in the book, “the longer I live.”

He wonders sometimes how long that will be. Recurrent brain injuries have been linked in some studies to premature death and various diseases. He worries about Alzheimer’s and chronic traumatic encephalopathy, the degenerative brain disease that’s been linked to football and can be diagnosed only after death.

“I’m really, really proud of my big-wave surfing career,” he said. “I achieved things and traveled to places I never dreamed I would be able to do. I pushed myself, and I paid a price, but I was lucky to get out when I did. I’m in a good spot now. ”

He’s still figuring out his future, work-wise. He’s lining up events to promote his book and would like to write others. Maybe do some public speaking.

“I feel like the sky’s the limit,” he said, left now to dream of a world making waves instead of chasing them.